Later today (Wednesday) our little house will make her way home! Here she is at her coming out party on Sunday, which was held at the farm where Johanna does her builds. Isn't she a looker!? 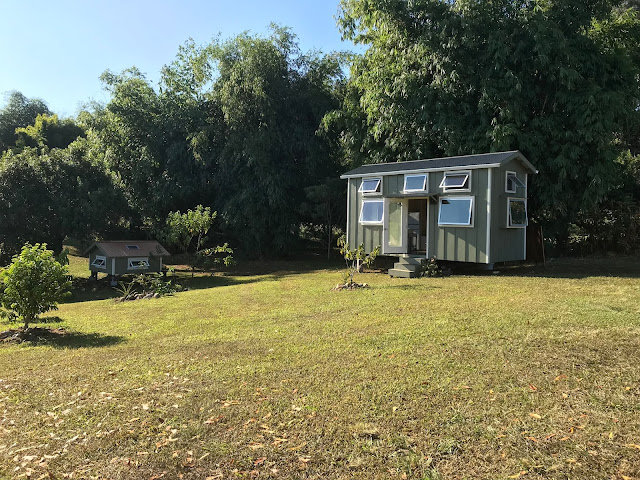 To say that the last few days have been crazy would be an understatement. We learned over the weekend that the daily closure of the access road to to our property is shifting from half days to full days on Friday, so everything has been shifted forward to avoid two weeks' delivery delay. The driveway, which was poured four feet short, needed some serious help with the transitions from dirt to concrete. They've been filled in with rocks on either end. While it's not complete, it's good enough for the trailer to make it to the site. 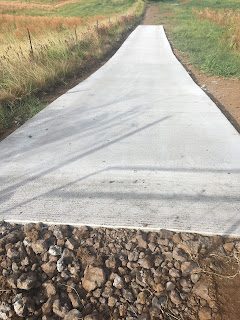 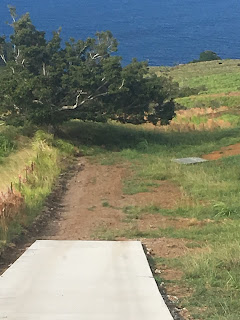 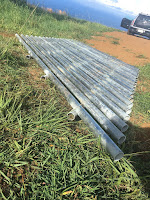 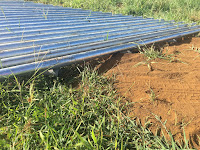 The cattle guard we had built by a local welder to put over a swale in the driveway (which can be seen off to the right of the tree) was finally delivered yesterday, after MANY fits and starts, thanks to under-ordered supplies and a failed first attempt because of a broken down truck. Here she is. (Yes, Halsey, I know you could have done a MUCH better, MUCH more beautiful job.)

We've been going round and round with the guy from whom we bought the tiny house on Craigslist (that we plan to use as a bathroom/shower house) to see if we can make this week a clean sweep of deliveries. That one requires a crane, a flatbed, and some handy maneuvering of the structure to land it on the piers. I don't have much faith in this part of the adventure, but we shall see.

Jim has been doing yeoman's work mending fences with our neighbors. Thank god for his empathy and patience.

Johanna has been scrambling to replace the maple baseboards with mahogany and to have made, painted, and installed a door for the little cabinet that is to the right of the stove (when we actually get a stove, that is). I was actually going to try to capture the whole delivery on FB Live, but as it turns out, meetings at work prevent my getting there before the crew. The set up - leveling, cleaning, etc. - apparently will take the three of them the better part of the afternoon. Who knows. Maybe I'll have a FB Live go for the "reveal." Hmmm. How much weight can I lose by 2pm?

Popular posts from this blog 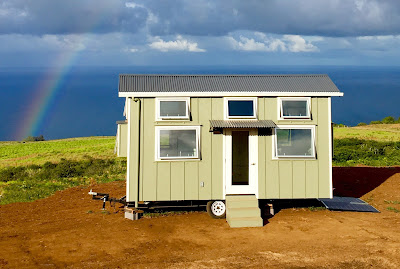 E komo mai [welcome], Lanikaimakani!  What an adventure we had yesterday!  Our little house made her way from Johanna’s building site to her new home in Laupahoehoe, winding down side roads, barreling along the highway at 35mph, and climbing up, up, up to her resting place! Alas, it’s not her final one, as the trailer's weld gave out in two places at the bottom of the driveway. For now she is where she can catch her breath, await for the repair, and anticipate her culminating 180 degree rotation. Johanna, Bill, and JC were an awesome team, working in lockstep to get her level and hooked up for night #1.  Mother Nature approves, we think, given the rainbow she threw our way at day's end. I'm particularly happy with the bed and the loft. Making it was not a highlight, but it’s actually possible to sit up up without hitting your head, which apparently I was worried about. And there is plenty of space for our various iPad, cell phone, and drinking water needs. Grateful
Read more 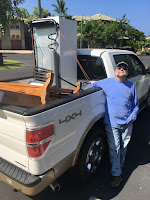 Today’s the big day... Akamai (the style name they’ve given our little house) makes her debut. Yesterday, we filled our truck with items to move and Jim spent the better part of the day contributing our five pieces of furniture to the stage. And Jim got a crash course in tiny living.  I have been obsessed with making sure that our bed would be every bit as comfortable as a “normal” one despite the close quarters. That means everything really needs to be as low-profile as possible in order to ensure comfort and that left at least some room for the human body once complete. The net result is a 5” bed frame, a 4” box spring, a 5” gel-foam mattress, and a 2” feather bed/mattress cover. Here's the math - that’s 16” total for a space that is 48” tall in the center. Needless to say, I’m quite proud of myself. As I sat comfortably in an HPA Board meeting, Jim delivered and put together all of these components. And - this is where the crash course happened - he did the latter while in
Read more

Build Day BONUS: The bumps in the road 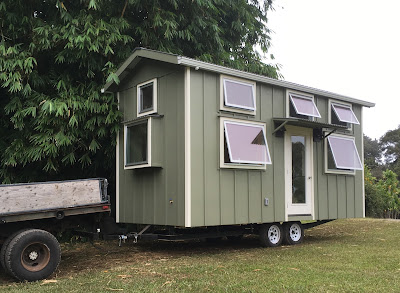 Here she is. Out of her cage. One step closer to life with Lucy and Jim. A thing of beauty, right?  Seriously, though, let's get real.  It ain't been all rainbows and unicorns. Naturally, I've shared myriad pictures and reports of progress, so it only seems fair to reveal some of the challenges and frustrations we've experienced along the way. I'm not talking about emotional difficulties; there have been, and continue to be, plenty of those, as you might have read in one or another in  Big Girl. Tiny House. Musings blog   (shameless promotion) . I'm talking about the building curveballs tossed at us along the way.  Allow me to say that these are, of course, first world problems. Nonetheless, they have been the things that got us pissed, annoyed, frustrated, and disillusioned. We've always recovered, but we've had clenched jaws more than once because of them. Here goes... Getting the land ready : Preparing the property for the house has been a major
Read more 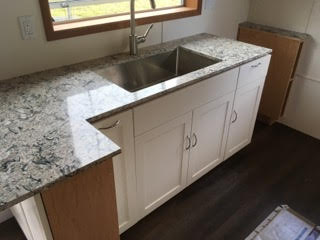 9-25-17 Wow! Got the flooring done. just needs base molding. got the faucet hooked up. the drawers fronts are on. the handles are in place.  The end panel got cut and painted one coat. The cushion and the pillows are great colors and they match perfectly.  There is just one oops that I had. a little short on the calculations.  When I sent the measurements to the Upholstery people, I was off by 8”. so we are short. Cute gap.  But how to make it work for us. I had a couple of ideas... One: we could make a bolster that rests there when you are not using it. like 12” tall and 8” wide to use it for an arm rest. either square edge or an angled one. like for a head rest. Two: make a small box for your blankets and stuff to fold nicely into. Three: put a round bolster in there for under your knees when you are finally prone and resting. Four: I think there is enuf material to redo that cushion.  Entirely up to you.  [We chose 4. A complete redo. I just know tha
Read more 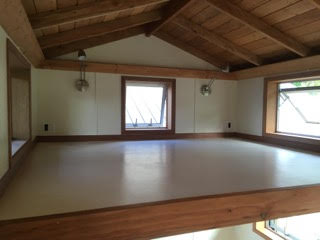 9/8/17 Cute loft... Got the loft painted and the base molding installed. so you can have a good idea of what it is going to look like. Good your lites are so high up. that window is 24”. your mattress ensemble is half way up the window. The USB outlets that Jim got need to go in single boxes. they don’t play well with other devices . I am unable to find a plate that works for that USB and a regular Lutron. hmm. If you can find this plate, right on. if not, then we need to buy two from Home Depot or Lowes that work with the Lutron double plates. We got the awning up and the second exterior light. we did remake the awning so it would be little bigger because the one part would not fit with the new light on left. it looks great! I heard the bridge by you is closing, but only in the am. I can work with that. We still are waiting for flooring parts to arrive, and the upholstery to be sewn and the granite to be fabricated. We are actually right on schedule. Bill is going
Read more 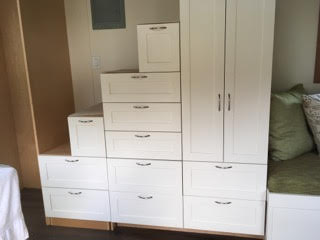 9/26/17 Coming down the homestretch... Bill got the cabinet handles on and most of the base-molding.  The sink is hooked up. the screens are in, tho we are 2 short... Milgard is just killing me. 2 of the 4’ x 3’ windows. Alicia has already contacted them. The fabric is at the upholsterer. I will take the foam down tomorrow morning. I think she is going to make it tomorrow.   The shower is all trimmed out. got the handle on it and the shower head. nice.  We got the end panel on the end of that cabinet, so all white now. will do final paint on it tomorrow. Will finish the base-molding tomorrow and what ever other riff raff we can find.  Will most likely move the hale out of the work area to the upper level. we are showing it off to people this weekend.  THEN it come to you on the 3rd. Lucky you! JC is getting back on the 2nd, so he will help deliver a hale he never helped with. how’s that...   Okay. think we are all in good shape.   How is the driveway doing? will
Read more